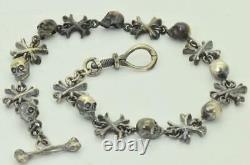 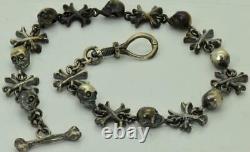 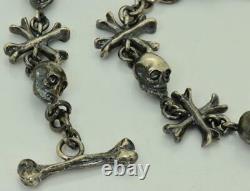 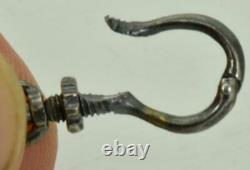 Memento mori jewelry is the name given to sixteenth through eighteenth-century jewelry that was created as a reminder of the inevitability of death and the need to live piously. Translation from the Latin, remember you must die, is very clearly indicative of the objective of the theme. Skulls, skeletons, and coffins, often worked in gold and enamel were the predominant motifs vividly illustrating the underlying sentiment of pending mortality. An important part of the memento mori jewel was the use of text to express thoughts of death, mortality, remembrance, and religion. Composed in Latin, French or English they were either engraved or enameled on the outside of a jewel or secretly on the inside, viewable only by the intended recipient.

Rings were the most common form of memento mori jewels although they could also take the form of lockets, pendants, and brooches. The sixteenth century saw an increase in bequests for mourning rings.

Often these were just plain bands engraved with a sentiment referencing the departed sometimes specifically outlined in the will. In the mid-seventeenth century, the theme merged with memorial jewelry and it became popular to have the hair of the departed person, along with relevant dates and initials worked into the piece alongside the skull, coffin symbols and message. The tradition flourished in the eighteenth century but the name of the individual being memorialized became more prominent, the mourning motifs became somewhat less gruesome and the use of intricate hairwork and elaborate allegories were de rigueur. Provenance:This unique piece comes directly from the famous Skulls collection of Dr.

Atanas Karamanov, who was the personal physician to King Ferdinand I of Bulgaria. Karamanov was also a member of. The first Bulgarian Regular Masonic Lodge named Balkanska Zvezda c1890's.

His collection contain over 1200 skull watches, skull goblets, skull victorican jewelry etc.. NOTE:PLEASE OBSERVE CAREFULLY THE PHOTOS! IT IS A SIGNIFICANT PART OF THE DESCRIPTION. Every potencial defect which is shown in the photos, but not mention in the description, will be considered for described.

All the photos shoot by professional Nikon 105 Macro lens under 40x diopter magnification, so you can explore even the smallest detail like under microscope! Get images that make Supersized seem small. Tailor your auctions with Auctiva's.

The item "Victorian solid Sterling Silver MEMENTO MORI 9 SKULLS pocket watch chain fob" is in sale since Tuesday, August 6, 2019. This item is in the category "Jewelry & Watches\Watches, Parts & Accessories\Watch Accessories\Chains & Fobs". The seller is "riaerica2000" and is located in Sofia.