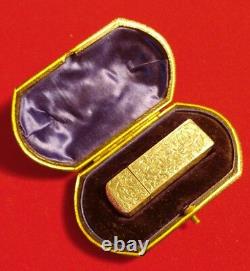 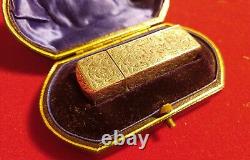 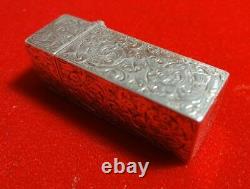 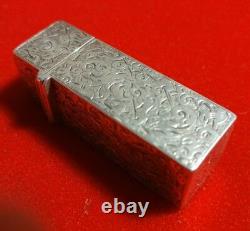 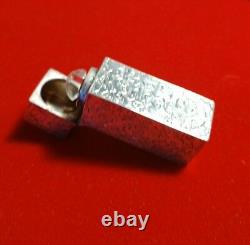 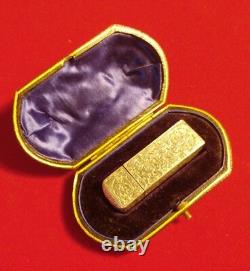 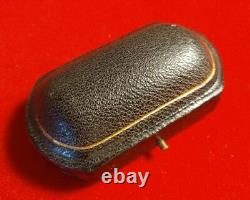 SUPERB VICTORIAN PERFUME FLASK BY SAMPSON MORDAN H/M LON 1891 WITH ORIGINAL CASE This is a very attractive small silver perfume flask in its original leather covered case. It is by Sampson Mordan, one of the most prominent and respected English silversmiths and whose works are highly collectible. Please see the attached photos which are an integral part of this description. The flask has a'square' cross-section which itself is uncommon in small perfume flasks. It is a feature which leads to this item being so sought after.

Both the case and silver perfume flask are in very good condition whereas the stopper has a few nibbles to the top. The first patent for a "metal pencil with an internal mechanism for propelling the graphite'lead' shaft forward during use" was obtained in 1822 (his co-inventor was John Isaac Hawkins). In 1823 Mordan bought out the rights of Hawkins, entering his first mark as "smallworker" in London Assay Office on 9 June 1823 (SM oblong). In 1824 he entered in partnership with Gabriel Riddle, registering a new mark (SM. Gr) in London Assay Office.

The partnership with Riddle was dissolved in 1836 and he continued the business as S. Sampson Mordan died in 1843 and the business was taken over by his sons Sampson (Jr) and Augustus. They were later joined by Edmund George Johnson and Zachariah Watkins who retired in 1879.

After the death of Sampson Mordan (Jr) his share of the business passed to his brother Augustus, joined as partner in 1890 by Harry Lambert Symonds. In 1898 the company was converted to a limited liability company under the name of S. In 1933 the distribution rights on the propelling pencil business were given to L.

The firm went into voluntary liquidation in 1952. Between the 1820s and 1870s the firm obtained more of 160 patents for various mechanical pencils. The first spring-loaded mechanical pencil was patented in 1877 and a twist-feed mechanism was developed in 1895.

In addition to pencils the firm had a large production line of small silver and gold items, most of them belonging to the type of "novelties" so popular at the end of the 19th/beginning of the 20th century. They were supplied to many retailers, including Asprey & Sons and the Goldsmiths & Silversmiths Co. Sampson Mordan & Co was present at the 1851 London Great Exhibition and at the 1922 and 1929 British Industries Fair. Every effort will be made to ensure that items are packed as safely and securely as possible. The item "SUPERB VICTORIAN PERFUME FLASK BY SAMPSON MORDAN H/M LON 1891 WITH ORIGINAL CASE" is in sale since Tuesday, December 4, 2018.

This item is in the category "Antiques\Silver\Solid Silver\Other Solid Silver". The seller is "ennarepea" and is located in Swansea. This item can be shipped worldwide.