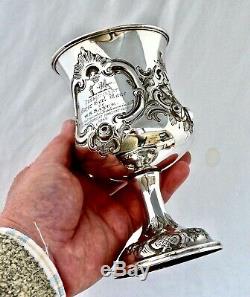 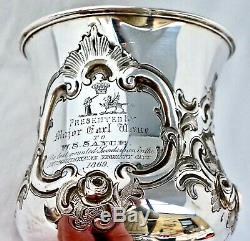 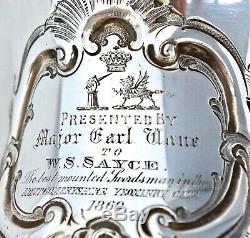 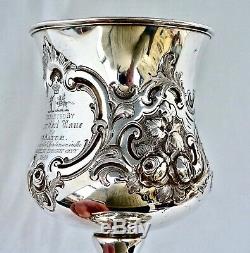 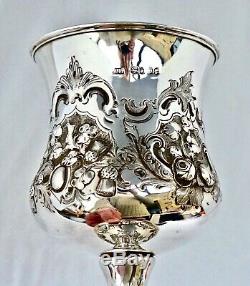 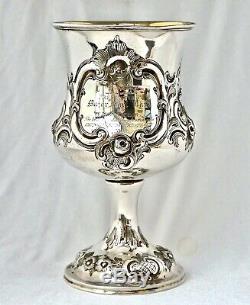 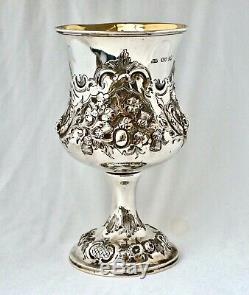 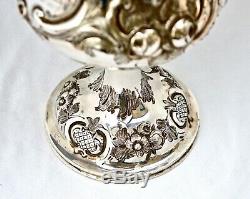 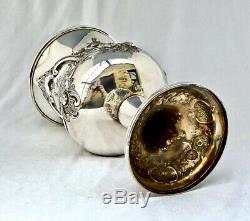 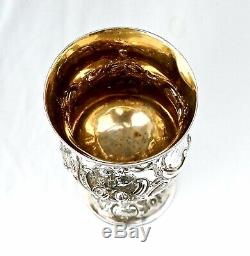 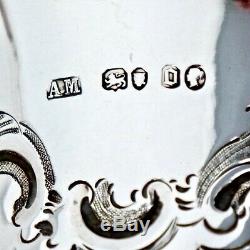 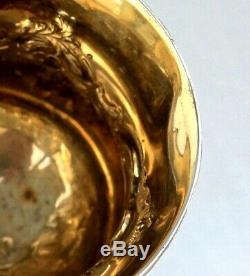 Stunning & historic Victorian sterling silver campana goblet hallmarked London 1869 by Alexander Macrae. The goblet has been engraved as a Welsh mounted swordsmanship trophy by the Montgomeryshire Yeomanry Cavalry. The cartouche is hand-engraved with the cavalry crest including the Welsh Dragon. PRESENTED BY Major Earl Wane TO W. The best mounted Swordsman in the MONTGOMERYSHIRE YEOMANRY CAVY.

The goblet is profusely decorated in repousse style with a floral decoration including shamrocks, roses & thistles. Internally the goblet is gilded. Diameter of rim: 95 mm. Diameter of base: 80 mm.

Maker's Mark: Alexander Macrae. Montgomeryshire Yeomanry Cavalry: Was a Welsh auxiliary unit of the British Army with its Regimental Headquarters at Welshpool, first founded in 1803 after the Napoleonic Wars broke out. Although temporarily disbanded in 1828 it was quickly re-established and became critical for Britain's defence in the 1860's (when the trophy was presented) as the threat of a French invasion led to the formation of volunteer brigades up and down the country.

It later provided volunteers to the Imperial Yeomanry during the Second Boer War and formed three regiments for service during World War One. Summary: As well as being an extremely attractive trophy, this goblet also represents an important part of early Welsh military memorabilia and is also clearly an important item in the history of the Montgomeryshire Yeomanry Cavalry. Mounted Swordsmanship trophies from this era are quite rare and this is an excellent example. NOTE: PLEASE SEE MY OTHER LISTING OF A "BEST SWORDSMAN" PRIZE SNUFF BOX DATED 1900 RELATING TO THE MONTGOMERYSHIRE YEOMANRY CAVALRY. The item "Solid Silver Mounted Swordsman Trophy.