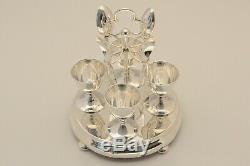 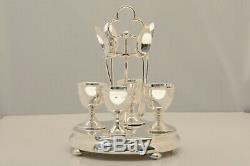 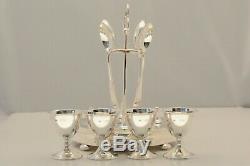 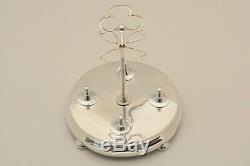 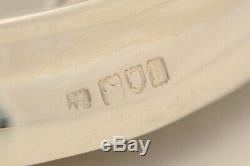 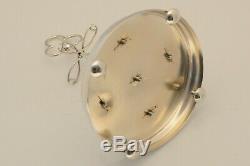 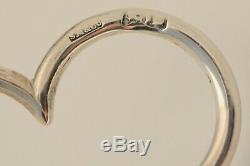 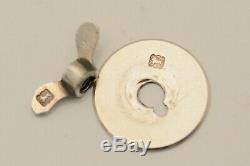 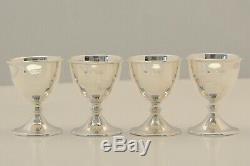 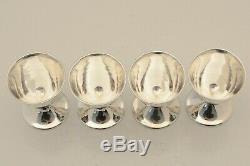 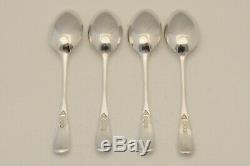 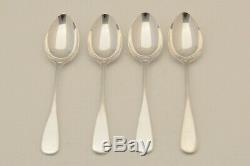 Sampson Mordan & Co of London England. This antique set can be immediately used or displayed by the new owner knowing this Victorian era Solid Sterling Silver.

Will appreciate in value and is extremely rare and well sort. The Cruet Stand, handle and Egg Cups are all matching to Sampson Mordan & Co with the same dating hallmark of c.

The tea spoons are hallmarked for another well documented silversmith in Garrard & Co Ltd Sheffield England dated to c. 1966-67, this is common that over the past century for differing silversmith makers to be combine for such items. London & Sterling Hallmarks are also shown on the wing nuts and spacers - All parts hold clear, mildly rubbed hallmarks- An Exceptional Find. It is a great opportunity to have an Solid Sterling Silver. Of this age that holds a wonderful character, appeal and displays as an authentic antique.

Along with a heavy combined weight of. (near 1/2kg) the condition is 100% original as received. As a classic collectible, this example will be a delightful addition to dinning or display proudly knowing the history is from a by gone era. Pictures shown are untouched & show natural reflections / Sun & light glare, additional pictures can be provided. Sampson Mordan was born in 1790 however nothing is known about his parents or siblings.

In 1822, Mordan and his co-inventor John Isaac Hawkins filed the first patent in Great Britain for a metal pencil with an internal mechanism for propelling the graphite "lead" shaft forward during use (ever-pointed or propelling) , as an improvement on the less complex leadholders that merely clutched the pencil lead to hold it into a single position. In June 1823 Mordan registered his first silver mark alone.

Following the new partnership Mordan entered a joint silver mark with Riddle in April 1824. Sampson Mordan died in 1843 and the business continued under the partnership of two of his son's, Sampson Jnr and Augustus. Mordan & Co had began primarily manufacturing propelling pencils the company also produced other products of excellent design and quality.

Mordan and Co Ltd gave the distribution rights for their propelling pencils to S G Sloan Ltd who also distributed pens for Waterman's. Then in 1941 during World War 2 and the Luftwaffe blitz on London, the Mordan factory was destroyed.

After which the company ceased trading and finally went into voluntary liquidation in 1952. Limited, formerly Asprey & Garrard Limited, designs and manufactures luxury jewellery and silver. George Wickes founded Garrard in London in 1735. Garrard is headquartered at Albemarle Street in Mayfair, London.

Garrard also has a presence in Harrods, London, Geneva, Lebanon, Qatar, Dubai, Moscow and Hong Kong. Garrard was the Crown Jeweller of the UK, charged with the upkeep of the British Crown Jewels, from 1843 to 2007.

The ICC Cricket World Cup Trophy was designed and produced in 1999 in London by a team of craftsmen from Garrard & Co. Garrard took sole control of the firm in 1802, with his sons Robert Garrard II, James and Sebastian succeeding him in running the company, trading as R.

Garrard (or Robert Garrard & Brothers) until James' retirement in 1835, when the company became R & S Garrard. The company remained in the hands of the Garrard family until the death of Sebastian Henry Garrard, great-grandson of Robert Garrard senior, in 1946.

The name Garrard & Company Ltd was registered in 1909, and the company moved to new premises in Albemarle Street in central London in 1911. In 1843, Queen Victoria appointed Garrard to the position of Crown Jewellers, leading to the production of numerous pieces of silverware and jewellery for the Royal Family, as well as the upkeep of the Crown Jewels.

In 1848 Garrard produced what is now referred to as The America's Cup, and is the oldest international sporting trophy. The Cup is an ornate sterling silver bottomless ewer originally awarded in 1851 by the Royal Yacht Squadron for a yacht race around the Isle of Wight in England, which was won by the schooner America. The trophy was renamed the'America's Cup' after the yacht and was donated to the New York Yacht Club under the terms of the Deed of Gift, which made the cup available for perpetual international competition.

In England the composition of sterling silver was subject to official assay at some date before 1158, during the reign of Henry II, but its purity was probably regulated from centuries earlier, in Saxon times. Some countries developed systems of hallmarking silver.

" z " - Dates to 1967 City of Sheffield. This Egg & Spoon Cruet Set will be ready for use or display.... You may notice this in the pictures. I pride myself on a high level of service, I value repeat clientele and happy to assist where I can.

ANTIQUES & RARITIES - bayo_madness. Check out my other items. Be sure to add me to your favorites list. The item "SILVER STERLING c1903 S M & Co LONDON HM EGG CUP SPOON CRUET SET RARE STUNNING" is in sale since Wednesday, March 27, 2019. This item is in the category "Antiques\Silver\Sterling".

The seller is "bayo_madness" and is located in Mount Waverley, Victoria. This item can be shipped worldwide.1903