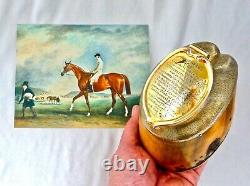 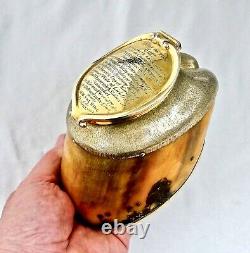 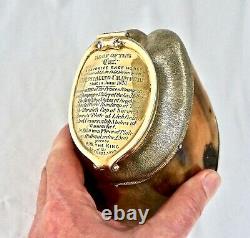 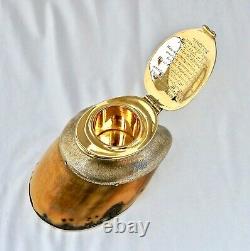 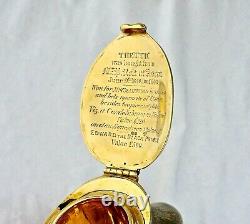 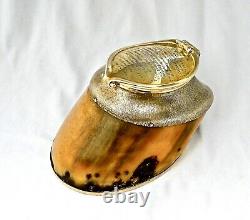 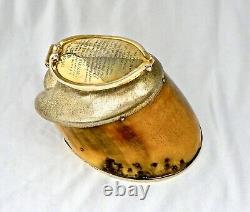 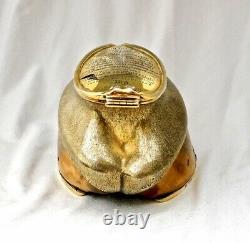 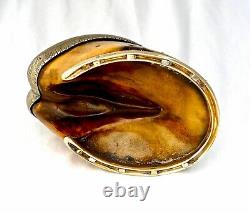 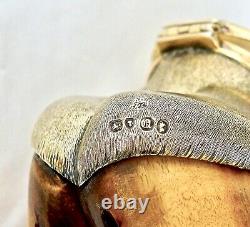 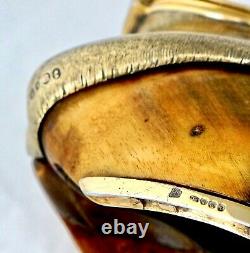 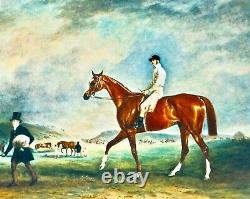 Historic Victorian sterling silver mounted horse hoof inkwell, being a hoof from one of the top thoroughbred racehorses of his day, "The Cur". No expense has been spared in the task of mounting the hoof in sterling silver; top silversmiths, R & S Garrard & Co created the mounts of the highest quality depicting realistic horse hair to the lower section & a beautifully crafted lid and inkwell setting. The hoof has been shod with a sterling silver shoe and all silver elements have then been superbly gilded, of such quality there has been little wear over the past 170 years. Both the lid & the shoe are fully hallmarked. Finally, a top engraver has been commissioned to hand-engrave both sides of the inkwell lid as follows. "HOOF OF THE "Cur, A FAVOURITE RACE HORSE at 6 years old & in 1848, the property of MR. Winner in 1848 of the Prince of Orange's Prize and Champagne Stakes at the Loo, Holland. The Brighton Stakes at Brighton, Chesterfield Handicap at York, The Warwick Cup at Warwick, Queen's Plate at Lichfield And Cesarewitch Stakes at Newmarket. THE KING of the NETHERLANDS. "THE "CUR was bought from Mr P. Included with the hoof is a photo reprint depicting "The Cur" entitled The Cur" Chestnut Racehorse With Jockey Up on Newmarket Heath" (see final photo).

The original painting was by John Ferneley Snr (1782 - 1860). He was the leading sporting artist of his day and most likely was commissioned to paint "The Cur" shortly after his Cesarewitch victory in 1848. I will also including a list of the first few winners of the Cesarewitch confirming "The Cur" won the 1848 race, the 10th ever winner of the race, however you can easily research this fact. The site is maintained by John Slusar & if you visit the site & the Sefton Lodge page you will see the full result of the 1848 Cesarewitch race won by The Cur. Hoof Weight: 638.1 gm.

Maker's Mark: R & S Garrard & Co. Cesarewitch Handicap: A flat handicap horse race open to horses aged three years or older. It is run at Newmarket over a distance of 2 miles and 2 furlongs and finishes on the Rowley Mile.

It is scheduled to take place in October each year. The event was established in 1839 with the inaugural race won by Cruiskeen. It was founded in the same year as the Cambridgeshire and the two races came to be known as the "Autumn Double". William Stuart Strling-Crawford (1819 - 1883): Born in Lanarkshire, Scotland, William was a prominent racehorse owner of his day.

Winning The Cesarewitch with The Cur in 1848 was his first major victory but he went on to win many more prominent races. In 1859 for example he won the 1,000 Guineas with his mare, Mayonaise which won by 20 lengths, the widest winning margin ever. He also went on to win the 2,000 Guineas and the St Leger. In 1878 he won The Derby with "Sefton".

Summary: It is rare for silver mounted hooves from famous racehorses to come up for sale and this 170 year old example is one of the earliest I have seen & in the bast condition. Clearly "The Cur" was a well loved horse and a favourite of his wealthy owner, William Stirling-Crawfurd. Of museum quality this is a piece of early horse racing memorabilia which would grace any collection. This item is in the category "Antiques\Silver\Solid Silver\Other Solid Silver".gloryhunter" and is located in this country: GB.

This item can be shipped to United Kingdom.