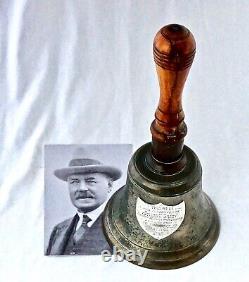 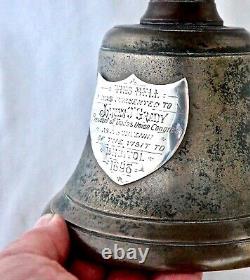 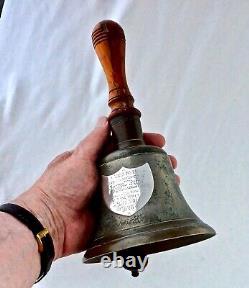 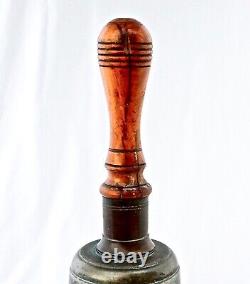 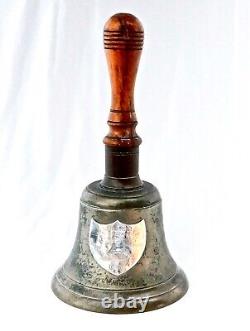 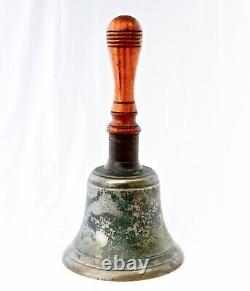 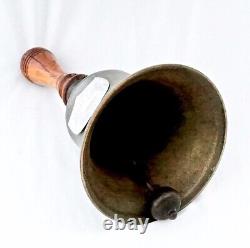 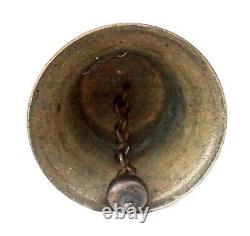 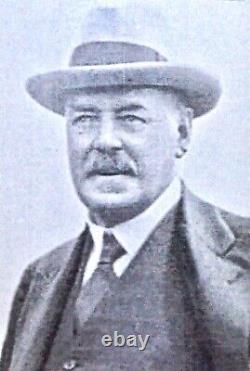 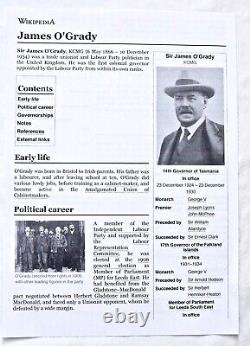 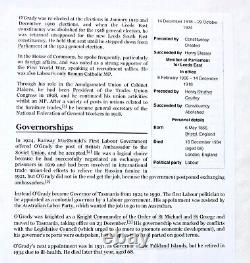 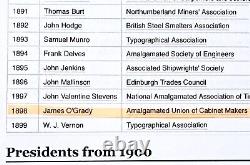 Historic & unusual brass hand bell with an attached sterling silver shield, which was presented to the 1898 President of the Trades Union Congress, early Labour Party founder & one of its first ever Members of Parliament, Sir James O'Grady. The bell is fully complete & still rings well. The engraving on the silver plaque reads.

"THIS BELL WAS PRESENTED TO JAMES O'GRADY President of Trades Union Congress AS A SOUVENIR OF THE VISIT TO BRISTOL 1898". Included with the bell is a small photo reprint depicting James O'Grady, a printout of his Wikipedia page & a list of the early Trades Union Congress Presidents which confirms James O'Grady held the post in 1898. Diameter of base of Bell: 130 mm. Silver shield tests for sterling silver but is unmarked.

Sir James O'Grady, KCMG, (6th May 1866 - 10th December 1934): James was born in Bristol to Irish parents. He trained as a cabinet maker and became active in the Amalgamated Union of Cabinetmakers. He was a member of the Independent Labour Party and was one of the first Labour Party MPs when he was elected as Member of Parliament for Leeds East in 1906.

He was subsequently re-elected at the elections in January & December 1910 and became MP for Leeds South East in 1918 when the Leeds East constituency was abolished in 1918. He held the seat until 1924 when he decided to step down from parliament having served as a Labour Party MP for 18 years. In 1924, Ramsay MacDonald's First Labour Government offered O'Grady the post of British Ambassador to the Soviet Union which he accepted. However, in the end he did not get the job because the government postponed exchanging ambassadors. Instead O'Grady became Governor of Tasmania from 1924 to 1930, the first Labour politician to be appointed as a colonial governor by a Labour Government.

He was knighted as a Knight Commander of the Order of St Michael & St George and moved to Tasmania, taking office on 23rd December 1924. In 1931 O'Grady was appointed Governor of the Falkland Islands but he retired in 1934 due to ill health.

He died later that year, aged 68. Trades Union Congress: The TUC was founded in 1868 and initially, the post of president was elected at the annual Trades Union Congress itself, and would serve just for the duration of the congress. Early standing orders stated that preference had to be given to a candidate from the city where the congress was being held. James O'Grady was elected President for the year 1898, becoming the 31st holder of the post.

In 1900, standing orders changed to state that the presidency would be filled by the person who had chaired the Parliamentary Committee over the previous year. SummarY: As can be seen from the photos this is an interesting & collectable item of early Labour Party & TUC history. A unique item also with a direct connection to James O'Grady's home city, Bristol.