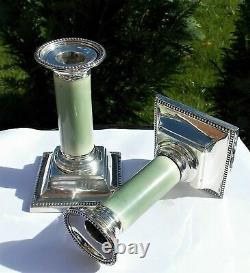 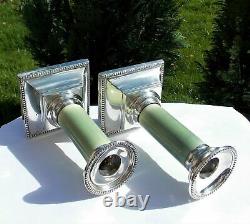 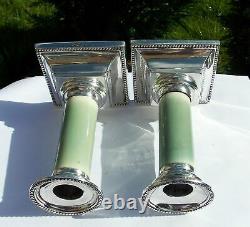 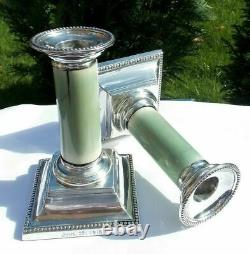 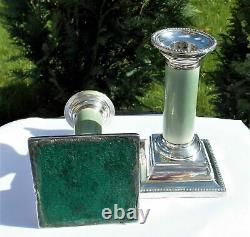 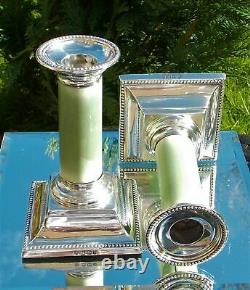 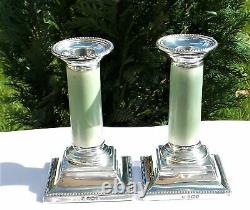 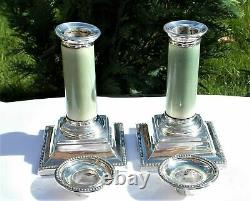 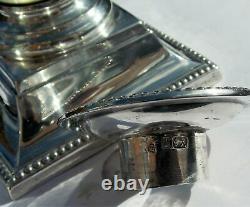 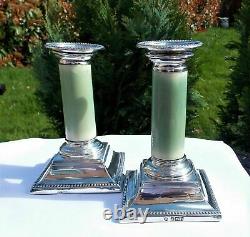 STUNNING EXTREMELY RARE PAIR VICTORIAN SOLID SILVER & GREEN STAINED CANDLESTICKS. This is an Extremely Rare Pair of Victorian Solid Silver & Turned Green Stained Ornate Column Candlesticks, these very rare Candlesticks were crafted by the world renowned Victorian silversmiths... Martin, Hall & Co (Richard Martin & Ebenezer Hall) , they were Assayed in Sheffield in 1891 making them 128 years old. This kind of Victorian Candlestick is very rare to find, the detailing as you would expect is superb, each candlestick is crafted in solid silver starting at the bottom you will see they have a square raised and stepped base which has a wonderful smooth finish which in turn is contrasted beautifully with a beaded decoration to the edges, this then has circular raised silver banding as you reach the bottom of the of this amazing column stem, then to the top it has a matching solid silver turned candle holder and then has a solid silver detachable sconce, but what makes them rare is the most amazing column which has been mounted with a carved and stained green central stem, they are breath taking, they contrast beautifully with the solid silver of the candlesticks, both candlesticks have a green base covering which is to protect any surface they sit upon, they stand just over 5 inches height, they are weighted and weigh 638.6 grams, the quality of the craftsmanship is superb, these would have once belonged to a very wealthy Victorian family and would have sat proudly on any table, they would have been used daily in a time when things were so very different, they are hallmarked to the bottom edging and also carry matching hallmarks on the sconces, they also have an inscription to the edge...

June 20 1915, these are an extremely rare form of Victorian Candlesticks and one you wont find very often on the market, they would look absolutely breath taking being used today. They are so very tactile and once picked up have the most wonderful feel, this will add something very special to any collection my photos dont do them justice. Martin, Hall & Co (Richard Martin & Ebenezer Hall). The origin of the firm is in the partnership established in 1820 in Sheffield by Henry Wilkinson and John Roberts who traded as Wilkinson & Roberts. Wilkinson left the business in 1836 and in 1846 John Roberts entered in partnership with Ebenezer Hall (his apprentice in 1836) under the style Roberts & Hall.

In 1854 entered into the partnership Richard Martin (of Martin Brothers & Naylor) and Joshua Hall (brother of Ebenezer Hall) under the style Martin, Hall & Co. In 1866 the firm was converted into a Ltd. The factory was active at Shrewsbury Works, Broad Street Park, Sheffield with showrooms in London (where they were listed as manufacturing silversmiths and electroplated manufacturers, silver, plated and steel cutlers), Sydney, Birmingham and Glasgow. The firm participated to the 1851 Great Exhibition, the Internation Exhibition (1862), the Sydney Exhibition (1879), the Melboune Exhibition (1881) and the 1915 British Industries Fair. Besides its sterling silver and electroplated items the firm had a successful cheap line of production on a patented white metal called "Martinoid".

One has been knocked at the top as you can see which has a created very old hairline which is firm as i believe this is very old damage, they both have a little piece of banding to the bottom of the stem missing, these things are mentioned for accuracy and dont detract at all from its rare beauty they both stand straight and look amazing. The item "RARE PAIR VICTORIAN Martin Hall & Co SOLID SILVER & GREEN STAINED CANDLESTICKS" is in sale since Saturday, April 25, 2020. This item is in the category "Antiques\Silver\Solid Silver\Candlesticks/Candelabra". The seller is "silver_treasures" and is located in ledbury.