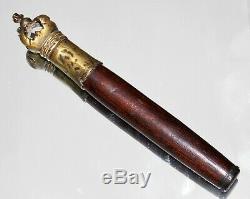 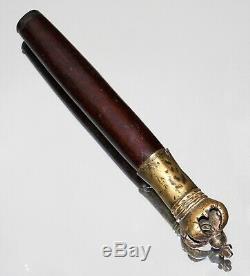 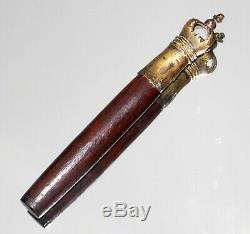 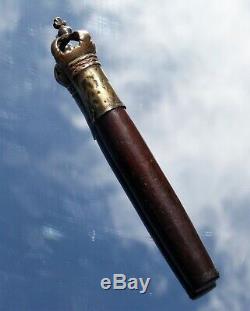 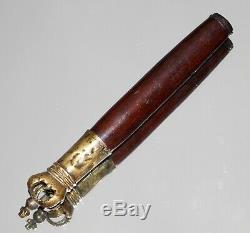 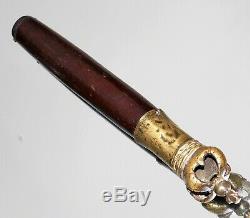 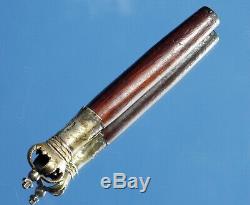 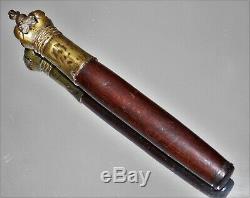 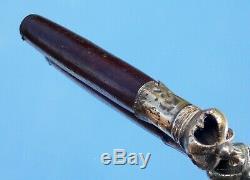 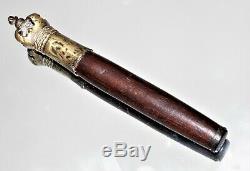 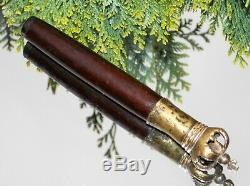 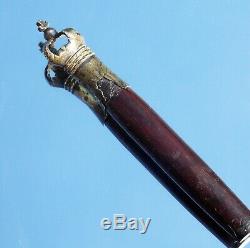 BOW STREET RUNNER CROWN TOPPED TIPSTAFF. This is a wonderful Rare Early Victorian maybe Georgian Bow Street Runners Tipstaff, im not to sure on the exact date but im sure the crown to the top would be of help to those who know, i would estimate circa 1800 to 1838 but it may even be 18th century, i just wouldnt know, but it is at least 200 years old, the collar and crown to the top of the wonderful piece of our History has been crafted in Brass and the Handel which has a wonderful slight bow shape. Is i believe crafted in oak. This would have been used many years ago before the invention of the Police Force as we know it today, this would have been used to protect themselves much like a trucheon would be used today, its stunning, it has a nice solid feel to the tipstaff and is not flimsy at all, the brass crown is also solid, the quality of the craftsmanship is superb, as you can see it has had much use many many years ago and would have some fascinating stories to tell, the brass is a little mis-shapen maybe were some naughty chap has had a tap to the head, the collar is very bruised with some loss as shown, the the botom of the wooden handle.

Just over 6 inche length. The name originates from the early law enforcement officers who would apprehend a person intended for arrest by enforcing their duty, if necessary, by beating them with a tipped staff or stave. The staff was made of wood or metal or both, topped with a crown. Some staffs were definitely a means of protection and this is where the present day policeman's baton, or truncheon, originates. Examples remain at the Royal Courts of Justice and the Metropolitan Police museum in London and vary depending on the type and rank of officer. These tipstaves were first carried in the late 18th and early 19th centuries. The Bow Street Runners were the first professional police force, organised in London by magistrate and author Henry Fielding in 1749. The group would end up successfully solving and preventing crimes until 1839 when the force was disbanded in favour of the Metropolitan Police, leaving behind a legacy for modern-day policing. Before the introduction of the Bow Street Runners and anything of the like, policing took the form of privately paid individuals used to maintain law and order without a formal system connected to the state.

People who partook in this activity, such as a figure called Charles Huitchen and his accomplice Jonathan Wild, were voluntarily policing the streets of London for big profits when in fact, these men and others like them were often behind much of the crime in the area. The informal, volunteer based system was not working. The resulting impact was a swelling number of private thief-takers operating around London, rather than the intended consequence of incentivising victims to prosecute the person who had carried out the crime. It was clear that the system in place was not functioning as it should, with crime still on the increase and new crimes developing, something new had to be done.

The law enforcement in operation in the eighteenth century had changed very little since medieval times. There were JPs, known as Justices of the Peace that had been in existence since 1361, appointed by the Crown but were often known for their corruption. Then there were the watchmen, referred to as Charleys because they were introduced by King Charles II, but had proved to be predominantly ineffective.

Henry Fielding, along with his half-brother John who was also a magistrate, founded the Bow Street Runners, a paid police force with the intention of preventing and fighting crime. The force he set up included six paid constables to patrol the streets of London. The name the Bow Street Runners referred simply to their location, whilst the term runners referred to their pursuit of criminals, although it was not a name that was particularly well-received by the constables themselves.

The constables were formally trained, paid and full-time serving officers, very different from the more informal, privately funded system which had been operating. Instead the men were paid using a government grant, therefore creating a closer link to a state-run law enforcement system. They were also to receive rewards when they caught their suspects, much like the Thief Takers, only with more formality and control in place. This idea proved to be effective and by 1800, there were said to be around sixty-eight Bow Street Runners fighting crime in London. The item "RARE EARLY VICTORIAN GEORGIAN BOW STREET RUNNER CROWN TOPPED TIPSTAFF" is in sale since Wednesday, July 15, 2020. This item is in the category "Antiques\Silver\Solid Silver\Other Solid Silver". The seller is "antique_treasure_chest" and is located in Ledbury. This item can be shipped worldwide.