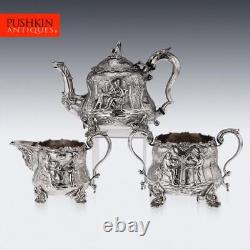 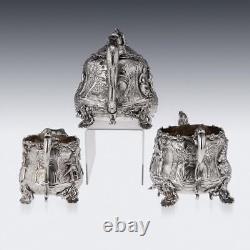 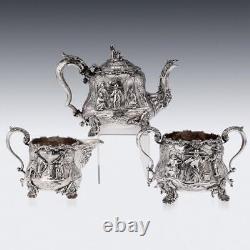 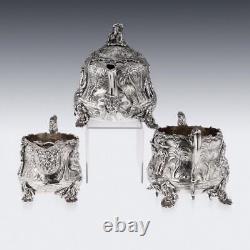 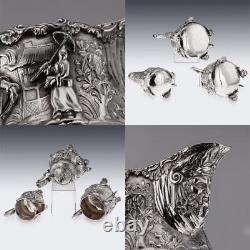 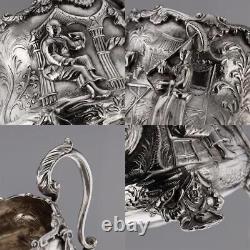 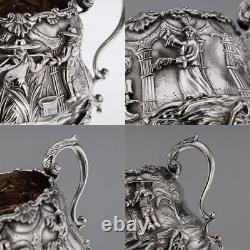 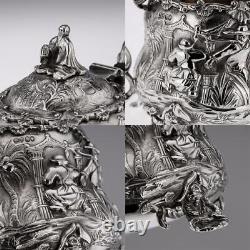 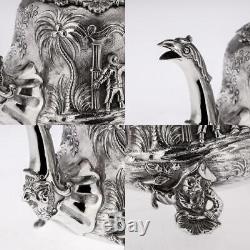 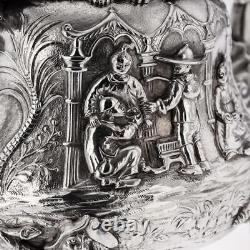 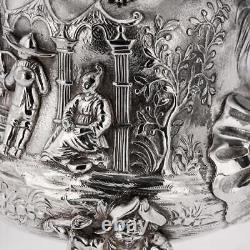 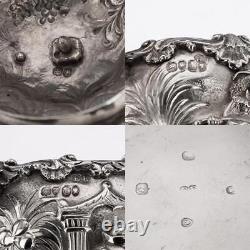 Each part is Hallmarked English silver (925 Standard), London, year 1838 (C), Maker EF (Edward Farrell) Edward Farrell's apprenticeship and early life is almost completely unrecorded. Although described in Holden's Triennial Directory of 1805-7 as a silversmith, we don't have any information about his work until 1813, when he registered his first mark. The most productive phase of his career began when he associated with Kensington Lewis, a silversmith and retailer who counted the Duke of York among his prestigious clients.

Their collaboration lasted from about 1816, until the mid 1830's and during this period Farrell was commissioned large and remarkable sculptural pieces. His flourishing imagination was influenced by 17th Century Flemish and German paintings. His tea services are often embossed with tavern and popular scenes inspired by Teniers the Younger's genre paintings. Farrell also experimented unusual designs after the Renaissance and Baroque, as well as in the most popular Rococo revival. After the death of the Duke of York, in 1827, he continued working in a smaller scale.

The remarkable silver gilt candelabrum displayed at the Victoria and Albert Museum and featuring Neptune riding a seahorse is a significant example of Farrell's creativity and skills. It was part of a large scale garniture ordered by the Duke of York probably around 1819. In Good Condition - no damage, just general wear. Please note that the majority of our interior pieces are located at our Interior Design Showroom in Buckinghamshire and some in our Royal Tunbridge Wells gallery. All items are cleaned and inspected before being dispatched, we use only the best packing materials to insure your item reaches you safely and discreetly. Get Supersized Images & Free Image Hosting. Create your brand with Auctiva's. Attention Sellers - Get Templates Image Hosting, Scheduling at Auctiva. This item is in the category "Antiques\Silver\Solid Silver\Teapots & Sets". The seller is "pushkin_antiques" and is located in this country: GB. This item can be shipped worldwide.