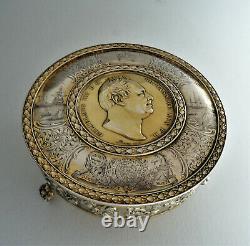 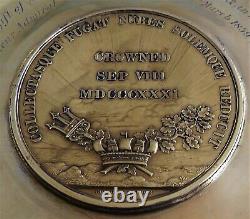 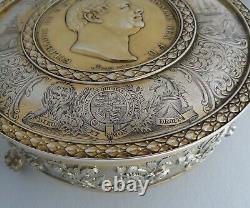 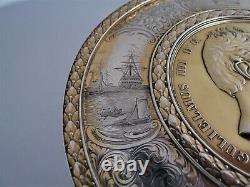 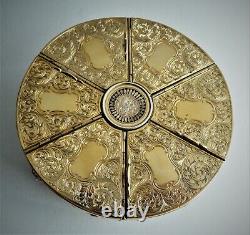 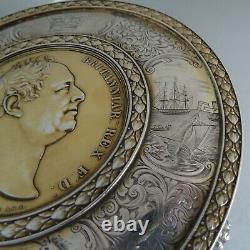 An Extraordinary Silver Gilt Royal Table Snuff Box. 5.5" diameter (14cm), 2.5" high (6.1cm). Of circular shape with pull-off lid, the top set with a medallion of King William IV in profile facing to the right within a band of stiff leafage, all surrounded by fine engraving depicting the Imperial Crown at the top, the Royal Arms and supporters at the bottom and 2 scenes of ships at anchor with oarsmen rowing small boats carrying unknown personnel, all separated by panels of scrolling foliage and enclosed within a further band of stiff leafage.

The sides embossed with the national emblems of England (a rose), Scotland(a thistle) and Ireland(a shamrock) in the form of foliate scrolls. And all raised on three claw feet, each fitted with a small wheel. The inside of the lid revealing the other side of the medallion being a trident and a branch of oakleaves issuing from a Naval Crown beneath the title "Crowned Sep VIII MDCCCXXXI" (1831) all upon a background of sun's rays. The outer edge with further lettering "Collectasque Fugat Nubes Solemque Reducit".

The body of the box with 6 compartments each with a hinged lid engraved with elaborate scrolling foliage around a vacant cartouche and all around a central pull-off cap engraved with the Royal monogram W. R in script within a finely pierced and engraved band of radiating leaves. The inside of the lid with inscription " The Gift of Lady Grant to John Irving Glennie in Memory of Rear Admiral Sir Richard Grant obt 3rd March 1859 aet 75 ".

Possibly made as a commemorative piece to celebrate the 20th anniversary of the Coronation of "Sailor King" William IV and to coincide with the Great Exhibition. Thence acquired by Lydia, wife of Sir Richard Grant or possibly given to the latter as a gift of appreciation for his services to the Royal Navy, thence to John Irving Glennie. Please contact me for further information. Table snuff boxes are well known but seldom does one ever appear on the market with such an unusual construction and weight.

Originally gilded all over we have left it in its current condition as it would be hard to justify re-gilding not only on grounds of colour but also possible detriment to the superb engraving. The use of wheels set into the feet together with 6 compartments, possibly for different types of snuff, suggest that the original intended purpose of the box was for a Naval Officer's Mess. A box of such a size would have been pushed along the table for those wishing to partake in the ritual. Rear Admiral Sir Richard Grant was a serving officer in the British Navy so he may have been presented with the box shortly after its manufacture in 1851. We are not sure of the connection between the three names in the inscription but there are a few possibilities.

Obviously Sir Richard and Lydia were husband and wife. John Irving Glennie was one of the founders of the Law Society and sat on the first council whose president was Michael Clayton.

The Society received a Royal Charter in 1845. Glennie was also a director of the Caledonian Asylum in 1815 and perhaps he helped Sir Richard when the latter's health started to fail either by way of legal assistance or by care and attention at the Asylum. David Pettifer is well known to collectors of vinaigrettes and pocket snuff boxes but was generally in the shadow (as were virtually all silversmiths working in small silver in Birmingham) of the Mills family.

This box is so entirely different to anything else we have seen by Pettifer that one can only imagine it was a special commission or it was "farmed out" to a smith more used to manufacturing such complex pieces. Ask any silversmith about how hard it is to make a box and most will say it is amongst the most difficult challenges especially one as complex as this with six compartments and hinged lids. Wyon was appointed chief engraver of The Royal Mint in 1828 and was highly skilled at cutting and making dies. The medal was made to celebrate the coronation of William IV on September 8th 1831.

The other side is stamped Rundel Bridge & Co who were not only the Royal Jewellers and Silversmiths of the Regency Period but generally known for employing Paul Storr as manager in 1807. Storr went on to become one of the most celebrated silversmiths in the history of English silver.

The latin lettering around the head of King William is taken from Homer's Aeneid (book1 147ff) and translates as "Put to flight the gathered clouds and bring back the sun". This is a remarkable box, the likes of which we have not seen before.

Its construction, iconography, decorative techniques are all of the highest order. Provenance:- The G S May Esquire Private Collection. POSSIBLE VIEWING BY APPINTMENT ONLY. The item "An Extraordinary Silver Gilt Royal Table Snuff Box" is in sale since Thursday, July 29, 2021. This item is in the category "Antiques\Silver\Solid Silver\Boxes".

The seller is "ma_gar8" and is located in Bushey. This item can be shipped worldwide.