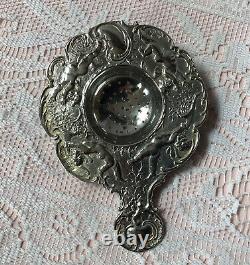 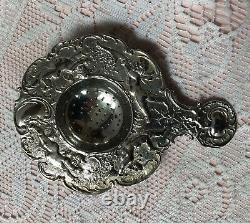 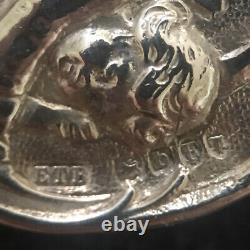 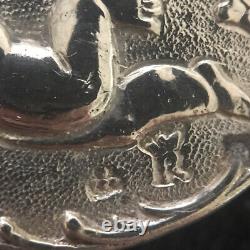 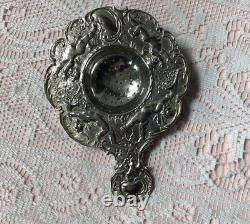 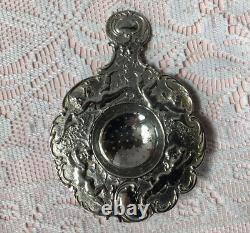 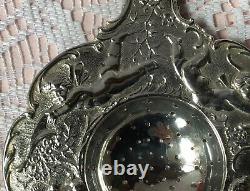 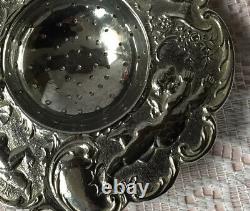 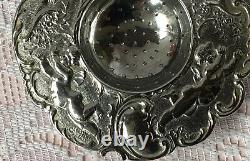 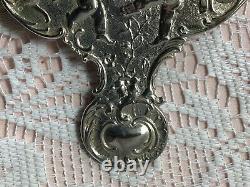 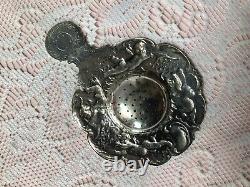 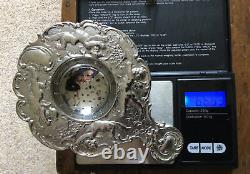 Many firms in Europe and in the United States produced this type of silver. Generally speaking, the recognition of reproduction silver does not present a problem since it is marked according to the laws of the country of origin. Contrary to this, the antique silver industry of Hanau chose to mark its output with fantasy marks. It is difficult to say if this was practiced with a clear intent to deceive. But it is strange that the spurious marks somewhat resemble old marks, and are also harmonized with the style of the piece.

For example, French rococo style reproductions are marked with French looking marks, German seventeenth century-inspired pieces got German-looking marks, and so on. Furthermore, most Hanau firms chose as company marks styles reminiscent of seventeenth and eighteenth century maker's marks. Mark stamping as practiced in Hanau would have been completely illegal in France or England, or for that matter in any other German city where a guild supervised the marking. But Hanau had a long tradition as a free-trade city. With the production of "antique silver", Hanau found a market niche, which brought its silver manufacturers enormous prosperity and worldwide reputation. The'father' of this industry was August Schleissner. The other leading firm of Hanau was Neresheimer, founded in 1890 as a partnership of August and Ludwig Neresheimer with Jean Schlingloff. Right from the start Neresheimer offered a wide range of highly decorative objects like nefs, tankards, coconut and nautilus cups, and other sumptuous sideboard pieces. Most of the information on this page are obtained from Dorothea Bustyn's articles on ASCAS- association of small silver collectors.

Similar symbols were used by different manufacturers and familiar or economic interaction between various Hanau firms could be at the base of marks crossover. The Antique Silver Industry of Hanau. This article was inspired by the many inquiries to various publications showing that Hanau silver is still often mistaken for old silver, and that the spurious marks are a consistent source of confusion for many collectors.

Additionally, many collectors believe that the cheap, massproduced items were all the Hanau silver industry created. In fact until World War I, Hanau was an important manufacturing center for highly ornate, decorative, and handmade items, and even the silver lover who prefers a plainer look must admire the workmanship and skill of the Hanau silversmiths. The "father" of this industry was August Schleissner. Vechte was a virtuoso silversmith, who excelled in chasing and embossing in the manner of the sixteenth and seventeenth centuries.

Having already received orders from Hunt & Roskell while working in Paris, Vechte relocated to London after the revolution of 1848, where he became employed by this firm. In 1849 August Schleissner had to flee Germany because of his political activities. He came to America via Switzerland and Belgium. In New York he worked first as a painter of "wanted" posters, but soon found employment in Massachusetts with an Attleboro silver company.

He immediately introduced a line of antique reproduction silver in the Gothic, Renaissance, and Mannerist styles. Because of his superb craftsmanship he soon received royal commissions. Designed in the neo-Renaissance style, the silver had to match the decor of the castle. Along with opulent buffet pieces like plates, tazzas, and ewers, Schleissner made numerous items connected with drinking ceremonies and games, so popular in the Renaissance and Baroque eras. There are double cups, "Willkomm" (welcome) cups, and above all the "Diana Trinkspiel" (drinking game), a beautiful centerpiece that featured Diana, the hunting goddess, riding on a stag.

The range of silver made for Bebenhausen is typical for the Schleisser production of Many decades to come. An eminently talented silversmith and a good businessman, he attracted the most discerning clients. One was Baron Karl von Rothschild, who declared his admiration by creating the expression "Style Schleissner". An article in The Watchmakers, Jewellers and Silversmiths' Trade Journal gives a contemporary account of a visit to the Neresheimer company in 1903.

The visit must have been an enormous success. Of the Neresheimer production the author states: Nothing was too small or too large, everything being copied with a care and minuteness which were indeed creditable. " The idyllic setting of the factory, the modern, well-lit premises, the tasteful furnishings of Neresheimer's private office, and the affability of his host contributed to his assessment that the establishment "breathed the very air of artistic feeling. Of the many Hanau companies, only a few can be mentioned here.

There were the older firms of W. Laufs and Backes & Co. Then Weinranck & Schmidt, who offered table silver and luxury goods in the modern and antique genres.

Georg Roth & Company produced silver that leaned strongly on French styles - festoons and portrait medallions are ever-recurring features. Along with its antique reproductions, the firm of Carl Kurtz offered miniatures and doll silver. In the nineteenth century Hanau silver was produced either from work drawings, which included the exact measurements and gauges of silver sheets from which the parts could be raised, or from carefully prepared master model from which the parts could be duplicated by the lost wax method of casting. By 1900 these models played a more important role in the production. They became the main capital of the silver manufacturers, and some companies had collections of more than 10,000 models.

In Hanau most of the silver companies did not specialize. On the contrary, the bread-and butter items like fancy cutlery and domestic silver financed the large, prestigious showpieces created for important customers and world expositions. Neresheimer enjoyed a decades-long successful business relationship with Berthold Mueller, his agent in London, England. Neresheimer products made for the English market have the English import marks next to the sponsor mark BM.

Schleisser had an active export business with America. It is interesting to note that his export production was stamped variously with: "Le Trianon", "Buchholz &Zelt" (an import firm in New York), Beverly Hills, Cal. All companies supported the school of design in Hanau, the Koenigliche Zeichenakademie, where courses in art history, drawing, chasing, modeling, etc. Were held, and which company workers and apprentices had to attend. Two leading designers, August Offterdinger and Max Wiese, worked as professors at this academy.

The period 1880 to 1900 was a time of enormous economic growth. Neresheimer, for instance, started in 1890 with only two workers, and by 1903 had developed into a firm with eighty employees. The percentage of unlearned labor was minimal. Workers who saw their company as lifetime employment were rewarded with high wages, and health and pension plans.

From 1890 to 1934 the number of antique silver producers increased to ninety-eight. Naturally this led to some unhealthy competitive practices. Retailers often bought only samples of new lines and asked other companies to produce cheaper copies, thereby saving the high cost of preparing a model. Companies were constantly forced to underbid each other. The mixing of styles - for instance, a rococo-style item would be furnished with feet or handles in the neoclassical style - appears most often on post-1900 production.

This was often based less on indifference to purity of style than on hard economic considerations. It was so much cheaper and quicker to use findings from existing stock than to cast new parts faithful to the style of each item. The increased competition eroded first profits and then quality of workmanship, and brought about the deterioration of working conditions. Hanau became a center for mass-produced articles, which were assembled from stamped out parts and cheaply seam-soldered. Easily identified, these items are mostly what come to mind today when we speak of Hanau silver.