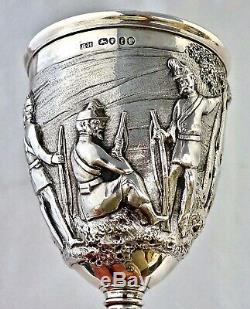 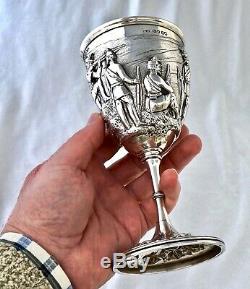 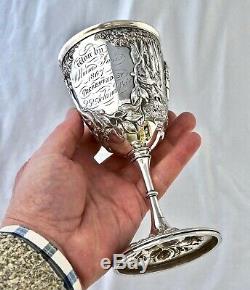 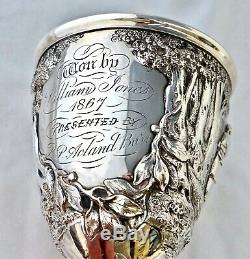 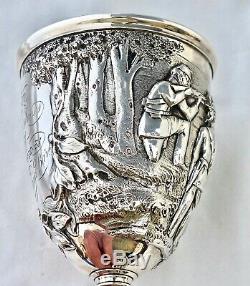 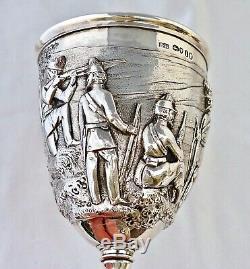 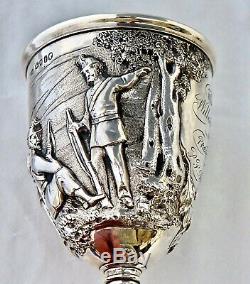 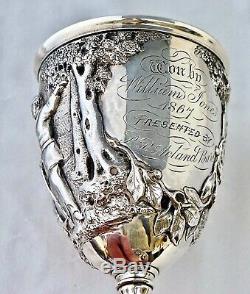 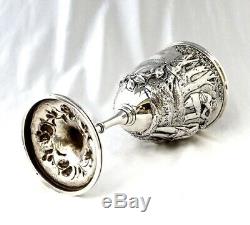 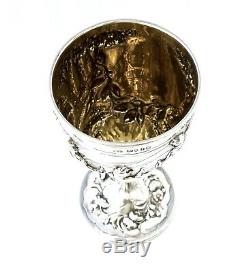 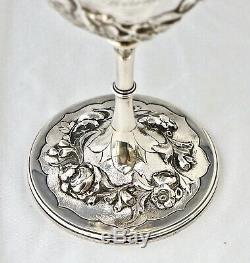 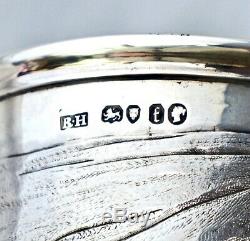 Absolutely stunning Victorian sterling silver rifle shooting trophy goblet hallmarked London 1861 by Robert Hennell III. The goblet has been superbly decorated in chased repousse style featuring four volunteer riflemen in various poses with a countryside background featuring trees and fields. The details of all the repousse figures are particularly crisp indicating a lack of over-polishing in the past 170 years. The cartouche is engraved Won by William Jones 1867. Although the goblet is not engraved with a particular regiment it is likely to be a Somerset Rifle Volunteers Regiment as Sir Peregrine Palmer Acland was a wealthy landowner living in Somerset. Internally the goblet is gilded so could be used for drinking, the best wine goblet ever? Diameter of rim: 85 mm. Diameter of base: 80 mm. Maker's Mark: Robert Hennell III. Sir Peregrine Palmer-Acland: The Palmer-Acland, later Fuller-Palmer-Acland Baronetcy, of Fairfield, in the county of Somerset, was created in the Baronetage of the United Kingdom on 9th December 1818 for John Palmer-Acland. He was the son of a younger son of the 6th Baronet of the 1644/1678 creation. 1st Baronet (1756 - 1831). Sir Peregrine Palmer Fuller-Palmer-Acland, 2nd Baronet (1789 - 1871).

The title became extinct on the death of Sir Peregrine in 1871. Fairfield House is an historic country house in Stogursey, Somerset. NOTE: In 1859, following the threat of a French Invasion, volunteer rifle corps were formed throughout Britain.

To encourage the soldiers to practice their shooting skills, many competitions took place with wealthy benefactors providing superb silver trophy cups as prizes. The "Riflemen" design as seen in the photos was one of the more popular and more elaborate designs and I have seen a few.

However most are heavily rubbed with a lot of the detail missing. This is the most detailed example I have seen. Summary: As can be seen from the photos, Victorian sterling silver rifle shooting trophy goblets do not come much better than this. The item "1867 Silver Somerset Rifle Volunteers Trophy Goblet.